Socioeconomic status, depression disparities, and financial strain: what lies behind the income-depression relationship?

Studies have consistently found the incidence and persistence of depression to be higher among persons with low incomes; greater income may be associated with reduced symptoms of depression. People with lower incomes may face stresses associated with poverty or with making ends meet that may trigger a depressive episode

Alternatively, depression also exercises an important influence on income and many of the other measures of socioeconomic status. Depression and/or its symptoms have been shown to be associated with reduced productivity, increased absenteeism, reduced aggressiveness in job-seeking, reduced ambitions in job choice, and lower educational attainment, all of which would be expected to have a downward effect on income. Accordingly, one could model some of the psychosocial determinants of economic status as

There are three distinct possible causal directions, which are not mutually exclusive:

Results: The regression analysis of depression symptoms on income provides evidence only of an association, and does not imply anything about causality. Previous research has framed this issue (income – depression relationship) in terms of alternative hypotheses of social causation. (low SES is a risk factor for mental health problems) and social selection. (mental health problems lead to lower economic status). The overall direction of this research has been to suggest that both mechanisms are at work.

The annual estimated income lose is $2,101 for a depressed person 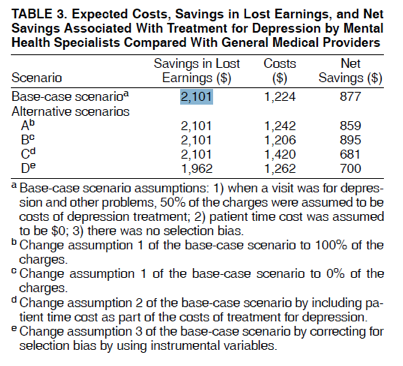 Depression and Work Productivity: The Comparative Costs of Treatment Versus Nontreatment

This article discusses the impact of depression on work productivity and the potential for improved work performance associated with effective treatment.

Depression is the mental illness thought to have the largest disease burden in the general population. A growing body of evidence documents that depression is highly prevalent in the labor force and that it is associated with substantial lost productivity. Greenberg et al estimate that the annual salary-equivalent cost of major depression due to work loss and work cutback in the US labor force is $33 billion.

Using data from two nationally representative population samples of workers, Kessler et al* attempted to make a crude lower-bound estimate of the workplace cost savings associated with depression treatment by analyzing data on the relationship between severity of depressive symptoms and short-term work loss and work cutbackÃ‰. Depressed workers were found to have between 1.5 and 3.2 more short-term disability days per month than those without depression, resulting in a salary-equivalent productivity loss of $182 to $395 per month.

Depression In The Workplace: Effects On Short-Term Disability Could treating workersÃ• depression help employers to save money on disability? These results are encouraging.

ABSTRACT: We analyzed data from two national surveys to estimate the short term work disability associated with thirty-day major depression. Depressed workers were found to have between 1.5 and 3.2 more short-term work-disability days in a thirty-day period than other workers had, with a salary-equivalent productivity loss averaging between $182 and $395. These workplace costs are nearly as large as the direct costs of successful depression treatment, which suggests that encouraging depressed workers to obtain treatment might be cost-effective for some employers.

Cost of Lost Productive Work Time Among US Workers With Depression