Everything we’ve been told to do – shelter in place, avoiding contact, social distancing to “Flatten the Curve” has been wrong.

If you catch COVID and you are young and healthy, the overwhelming odds are that you will recover without any lasting ill effects. What really matters is not who catches the virus, but who dies from it.

The lockdowns have been based on geography, areas where there have been a high concentration of cases, like New York. But that’s wrong; no matter the area, it’s always been a specific demographic that was at risk, and its well established that that demographic is older people with preexisting illnesses.

In other words, no matter how many cases there are in New York or any other location, all those cases are concentrated on older people and/or those with an existing illness affecting the respiratory system.

And this is not according to some fringe data, but the US Center for Disease Control (CDC)’s own data, per the chart from them below. 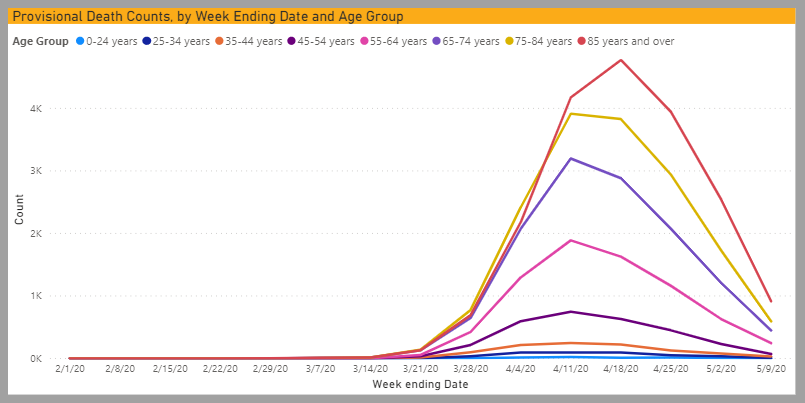 As of May 13, the CDC says only 4204 deaths have occurred in the US from those aged 55 or younger. That is a tiny number in a country of almost 330 million, and far less than die from drunk driving every few months, year in, year out.

If you’re young and healthy, you have far less chance of dying from COVID than you do from a car accident or many other causes.

So we could have simply told the people at risk to stay isolated and we would have saved just as many lives as we have by shutting down the world.

And we would have avoided the massive unemployment, destruction of businesses, personal isolations – the vast majority of people would have been able to go about their business just as normal.

I realize this seems impossible because you hear something else everywhere. But it’s quite clear from CDC’s own data.

If you’re young you do not believe that it’s possible for governments around the world to have made such a colossal error, and with so little resistance from their citizens. But if you’re young you didn’t live through the AIDs scare in the early 80s.

At the time, everyone was told with almost religious fervor that ‘Everyone is at risk – AIDS does not discriminate.” That simply wasn’t true – AIDs is transmitted via blood, and the vast majority of deaths were from needle sharing among drug addicts, tainted blood transfusions, and homosexual sex. This is not disputed now.

But if you had said that “Everyone is at risk” was not true in the height of the fury, you would have been branded as a crackpot.

Join our campaign to #EndtheLockdownNow