[September 07, 2020] Based on our analysis of data from the Center for Disease Control, as of September 07, COVID-19 is the 3rd largest cause of death among Americans thus far in 2020.

For every person that has died in the US in 2020 from COVID, 7 have died from other causes, mostly preventable, such as accidents and heart disease.

For cases other than Coronavirus, this data is taken by pro-rating for the 251 days thus far in 2020 from the Centers for Disease Control data for 2017, the latest available. These causes of death are fairly constant from year to year.

For every person that has died in the US in 2020 from COVID, 20 have died from other causes, mostly preventable, such as accidents and heart disease.

For cases other than Coronavirus, this data is taken by pro-rating for the 107 days thus far in 2020 from the Centers for Disease Control data for 2017, the latest available. These causes of death are fairly constant from year to year.

[April 9, 2020] Just to be clear, of course, lockdowns decrease the fatality rate from COVID-19, just like they would do so with the flu or any other infectious disease. You could decrease flu deaths every year by keeping society locked down. You could also cut down on the huge number of motor vehicle accidents each year. In the United States alone about 32,000 people are killed, and 2 million injured, from car crashes every year.

But we don’t shut society down to prevent car crashes, or the annual flu, because the overall costs to individuals and society as a whole would far outweigh the benefits of doing so.

Epidemiologists are concerned only with how to prevent or limit the spread of an infectious disease. They are not qualified, or concerned with, assessing the overall costs to society of a lockdown.

The purpose of democracy is to allow individuals to make their own decisions, based on their own judgments, about the best course of action for themselves and their families.

If you give up on people to make that sort of decision, especially in times of crisis, you have given up on the entire idea of democracy.

An Angry Reader:
I profoundly disagree. I am the daughter and sister of doctors, including one on the ICU frontline, and to compare this pathogen's impact on hospital beds and resources to flu just doesn't fit with either the experience of those doctors or the actual hard data coming out of the overwhelmed healthcare system. Take a look at the photos coming out of New York -- makeshift morgues in warehouses in Brooklyn -- a state whose death toll now surpasses two 9/11s and tell me with a straight face that flu has the same impact? If that is true, why don't we see makeshift morgues every day of the year? If your answer is that influenza kills more quietly and steadily... well, exactly. Impact on the healthcare system and everyday life is as important a consideration as the raw numbers of the dead.

The numbers you've cited for comparison are all annual -- and it hasn't been even a quarter of the year since this virus has ravaged through US (or the UK) society. By most projections, the annual loss from COVID-19 will far surpass that of flu.

Finally, it's not merely morbidity that matters. Even if you don't die, you could end up in the hospital -- a typical stay is up to 28 days. And profiles of victims, both of those hospitalized and those who ultimately die, should give pause to any oversimplification of who is vulnerable and who isn't -- twenty-somethings with no underlying health conditions have died. (As have thirty-somethings, and, very rarely, so have teenagers.)

This is a coronavirus. We know nothing. The influenza has been present in society for at least a century. I find the comparison facile and unhelpful, and note it is one typically made by those with a political or economic agenda (Trump, Elon Musk, etc). No public health expert has credibly put forward that view.

There is no Constitutional right to go shopping or watch a football game in a large crowd. But there is a restriction on yelling fire in a crowded theater. That restriction, while not directly applicable, exemplifies the right of the government to limit individual behavior that could have a catastrophic impact on a crowd. Just like transmitting this virus could.

Our response
Annualized causes of death from CDC:

The best model, the IHME model (from University of Washington) yesterday revised total projected U.S. deaths from over 80,000 to 60,000. The original screaming from people like you was for "millions of deaths". Then 100,000-240,000. Compare that to numbers at top of this email, which occur a year in, year out.

And no, the numbers aren't coming down due to social distancing, but due to the fact, the projections were always alarmist and unfounded.

Regardless of what photos you see, or what orthodox views you hear - from people just thoughtlessly repeating each other in an echo chamber, these numbers are facts.

And you're absolutely wrong, and showing a profound ignorance about the US Constitution and US laws; there is a basic premise of freedom of movement, and the right to congregate. To go shopping, to go to a football game, to do whatever people damn well please to do in a free country. And you have the right to stay home if you do, please.

What there isn't in the Constitution are some restrictions on my freedom because of people completely incapable of independent thought and rational analysis of costs and benefits panic and decide to huddle in their houses like caged animals.

[April 8, 2020] As we update this page today it’s becoming increasingly obvious – at least to those closely following facts and not headlines – that the lockdown will be far more damaging than the actual virus, and this entire episode will go down in history as one of the greatest examples of mass hysteria humankind has known.

As of April 8, there were about 83,000 confirmed deaths from the virus around the world. To put that number into context, in 2020, under normal circumstances, about 14,250,000 people have died from other causes, so the virus has caused an increase in the overall death rate of about half of one percent.

The results of the lockdown are as follows: 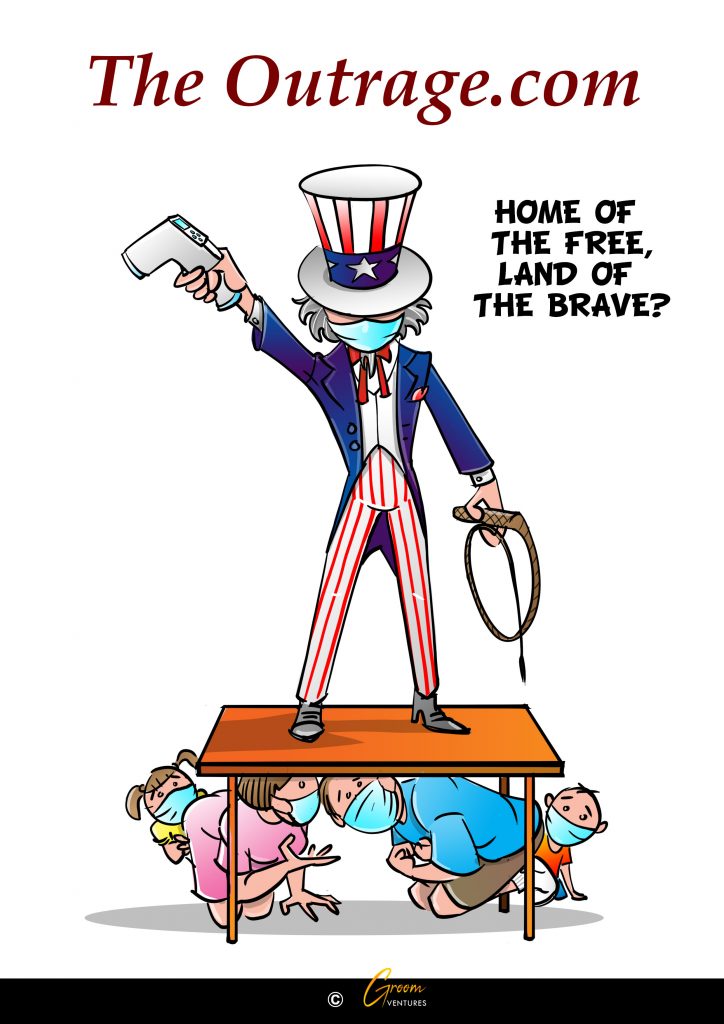 Tired of being locked down like an animal? So are we.

The pandemic is serious, but the response is wrong; you don’t save lives by treating the whole world as a prison, and you don’t win a war by imprisoning your own troops.

If you care at all about human freedom, then you have to be terrorized by the idea that politicians around the world have all appointed themselves dictator, telling people when they can leave their own houses.

Are those of us living in democracies really going to follow the lead of China, a ruthless dictatorship where the virus began? Or are we going to #Followtheswedelead.

We lived through the AIDs epidemic.  At the time, the world was awash with the idea that anyone could catch AIDs, and the media was preaching the idea that the world would be overwhelmed with a tsunami of AIDs victims, including millions of heterosexuals. That was simply not true; AIDs was terrible, but it didn’t destroy the world, and the victims were overwhelmingly those who received a tainted blood transfusion or engaged in homosexual sex.  We’re not making a judgment; we’re just dealing with the fact of what happened.

COVID-19 has thus far, as of April 4, killed about 60,000 throughout the world, mostly the elderly with preexisting illnesses. By comparison In 2017 alone, just in the United States, there were 70,237 recorded drug overdose deaths, and of those deaths, 47,600 involved an opioid. Currently, an estimated 130 people every day in the United States die from an opioid-related drug overdose.

People dying from opioid overdoses are almost entirely young, so the actual life lost to opioids is far, far greater than to the virus, yet we don’t shut down the world; in fact, opioids are still sold.

Around the world, approximately 1,350,000 people die every year – year in, year out, in car crashes. Yet not only do we not stop the world, but everyone continues to drive because it’s an important part of life.

Already in 2020, over 15,000,000 people have died from causes that people always die from; cancer, heart disease, accidents, etc.  Deaths due to the coronavirus are a tiny part of overall deaths. That means that for every death from the virus, there have been 250 deaths from other causes.  Life goes on, or it should.

The mainstream media is, as usual, united in bringing everyone a single point of view; that a total world lockdown is vital, at any cost to freedom, personal choice, and the economy.

We think there’s room for a different point of view, and we want to make sure those other points of view are known. In some cases, we’ll link to sites we’ve created, and sometimes to those of total strangers; whatever gets the point across.

Our main point is that the costs of a lockdown have to be considered as well as the benefits. Will the lockdown save some lives? Yes. But at a horrendous cost.

And more people will die from the lockdowns than are saved, in the long run.

We live in a world where OneSpeak seems to have taken over; no matter the issue, one prevailing opinion seems to sweep the world. If you want to think that I’m an insensitive idiot for challenging the prevailing wisdom, that’s fine. Hate away.  But before that automatic, robotic response kicks in, just #CONSIDERTHECOST of the lockdown.

For some (very rare) sane technical analysis of this issue, see this email that the CEO of tech firm MicroStrategy sent to the employees of his company.

If you want to be outraged by our take on the crisis, see theoutage.com.

If you just want to get through the crisis with your mind and spirit intact, find some good news and uplifting content here.

Remember when you could travel the world and see all the beauty it offered? That’s why we created the Indo Art House.  We offer our pictures to remind you of all that beauty that you can find on the site, on Instagram, or on Twitter.

Of course, you should stay safe, but you also need to stay sane.

This is also a great time to use our tool to take a deep dive into your entertainment options.

Join our campaign to #EndtheLockdownNow on social media.