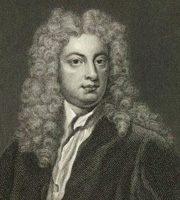 His essays in “The Tatler” and “The Spectator”, influential periodicals of the time, strongly influenced eighteenth-century opinion, especially in the areas of public behavior and literary taste. His essays were considered some of the finest of his day and his tragedy, “Cato” (1713), was proclaimed by Voltaire to be the finest in the English language. Due to his skill as a propagandist, he was given a number of important posts in the Whig government, although his government service was subject to the ebbs and flows of Whig political ascendancy.

The eldest son of a successful clergyman, Addison was well educated and graduated from Oxford in 1693. He spent ten years at Oxford as a tutor, interspersed with travel throughout Europe and writing. In 1704 Addison wrote a poem, “The Campaign”, to celebrate Marlborough’s great victory over the French at Blenheim; the poem propelled his political and literary career. He collaborated on the periodicals with his old school-mate Richard Steele and had less enduring friendships with other important literary men of the day, such as Jonathan Swift. His quarrels with satirist Alexander Pope led to his famous caricature by Pope in “Epistle to Arbuthnot.”