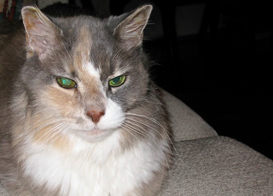 Looking regal as she ponders the universe 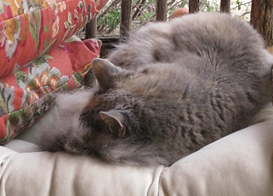 Taking a break after another tough day 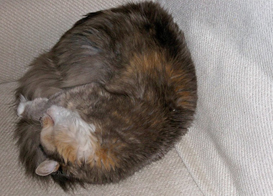 In my life I've loved five females: a girl, a woman, my mother, my grandmother, and a cat. This story is about the cat. 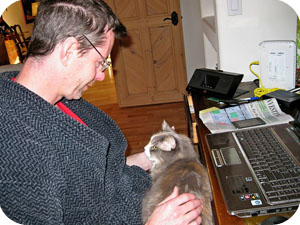 I’m a pretty normal guy (not true).  I was captain of my high school football team. Even at 50 (old!) I bench press more than the guy you know with the big arms. (Yeah, that guy, with the tat.) Despite being a very average looking man, I’ve dated my share of pretty women, but was never too interested in a commitment. Samantha was the girl for me. (That’s the cat.) You might think I’m a weird, single, middle aged guy; you’d be right. (Not really.)

I wasn’t really a cat person. I grew up with dogs. But one day I was sitting out on my front porch of my house in Leesburg (charming small town in Virginia) smoking a cigar. Samantha wandered by. She seemed like a very friendly cat; she just walked up on the front porch, circled around me a bit, and jumped in my lap. (Okay, maybe she’s a little easy, but you won’t end up holding that against her.)

From that day on I started looking for Samantha. She’d come by while I was sitting on the porch. She was such a loving animal; I thought she must be living with very nice people; only in a secure environment could a cat become that friendly, right? I was wrong; she was living in a house of pain, with a drug dealer, an older woman, and two foster teenage girls. And 4 cats. Also a dog. The police visited pretty often. The drug dealer was sleeping both with the older woman and one of her foster daughters. Ugly. One of the foster daughters had adopted her from a shelter; Sammy was originally a street urchin.

They decided to give away the cats; I have no idea why, but they didn’t seem too unhappy about it. I took Sammy. Or she took me. I think she knew she was going to be given away, and my house was the nicest house in the (not generally very nice) neighborhood. And she wanted to be near her old pals, so she could cat around with them. So she adopted me.

I had no idea what to do with her really. She wanted to get outdoors, and would sometimes hide behind the door so she could dash out when I came in. One time I had to rescue her; I couldn’t find her, and it turned out she had gotten trapped behind the washing machine. She walked around the counters of my bathroom, knocking stuff over. I wondered if I had made a mistake, and maybe I should give this cat back.

One (and only one) time she killed a bird and left it on my front doorstep as a trophy. I kicked her out for the night. Mainly, she wanted to cat around with her pals in the neighborhood. I often had to walk up and down our street trying to find her; sometimes she’d be hiding under a parked car. I often had to lure her home with Fancy Feast.

My landlord (bad man!) decided to sell our cozy house. I had to move, so we went to the country, a place called Wintergreen, not too far from the college town of Charlottesville, Virginia. We had a nice house with a big lawn and beautiful views. Sammy liked to sit on the patio and enjoy the scenery. I (semi) adopted a black lab and a yellow lab, Jax and Scout, who were being ignored by their family, my neighbors. They were nice people, but they had a couple young kids, so the dogs weren’t getting much attention. The dogs started spending a lot of time at my house. I fed them and they slept in my room; Sammy on the bed, Jax on the floor, and Scout in a big chair. We were a happy group. The dogs’ owners appreciated that I was giving their dogs quality care and attention, and they always knew where to find them. Eventually the family decided to move away and they took the dogs with them, but they promised they would pay more attention to them.