Then preview excerpts from the rest of the book.
Buy the full book At Amazon 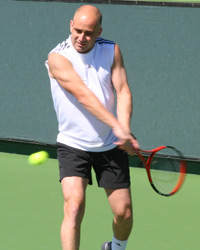 Agassi was the closest thing his sport had to a rock star..

Andre Agassi stared at the small mound of crystal meth powder his friend “Slim” had just poured on the coffee table.  He leaned over and snorted, then slipped back into his chair and felt “a moment of regret, followed by a vast sadness.” Just two years earlier, Agassi had been the top tennis player in the world, reaching the rank of #1 after a decade as a professional, during which time he had won Wimbledon, the US Open, the Australian Open as well as numerous  lesser tournaments.  During the early 1990s, he helped the United States win three Davis Cup titles, and he took the gold medal in men’s singles at the 1996 Olympics, held in Atlanta.  In addition to his successes on the court, Agassi was the closest thing his sport had to a rock star; he stood out to fans — and advertisers — with his flashy, charismatic personality, his colorful outfits and his long, flowing hair.  By the end of 1996, however, Agassi’s success began to wane.  He suffered early-round losses in the US and Australian Opens, and an old wrist injury resurfaced, limiting the number of matches he would play in 1997.  He continued to use crystal meth throughout the year and eventually failed a drug test, but he evaded punishment by claiming that he had accidentally consumed a spiked soda.  His world ranking slipped to #141, and he no longer felt a love for the game.  It seemed as though Agassi’s once-bright career was fading fast.

Andre Agassi could barely keep his composure as he addressed the crowd in Paris, where he had just won his first French Open title. “I never dreamed I’d ever be back here after so many years, I’m so proud,” said Agassi, his voice shaking. “I’ll never forget this, I’ll never forget this. I’m very blessed.” Agassi began the tournament ranked 13th in the world and had made a surprising run to the final match, where he defeated Andre Medvedev — a victory that was itself a remarkable comeback, as Agassi had been down two sets to none in the five-set match before storming back to take the title.  With the win, Agassi completed one of the most remarkable comebacks in tennis history, and he became only the second men’s player ever to win all four of the major tournaments (Wimbledon, the US Open, the French Open and the Australian Open).  He went on to win Wimbledon once more and take another two Australian Open titles, returning several times to the #1 spot in the next few years while remaining in the top 10 for the rest of his career.

Years later, Agassi described the failed drug test as a wake-up call. He realized that “My name, my career, everything [was] now on the line. Whatever [I had] achieved, whatever [I had] worked for, might soon mean nothing.” He stopped using crystal meth shortly afterwards and put himself on an intense training regimen.  With his ranking so low, Agassi was unable to play in some of the major tournaments and had to work his way back up by appearing in the so-called “Challenger Series,” which is to professional tennis what the minor leagues are to professional baseball.  He carried his own bags and no longer received VIP treatment when he played.  Along with younger, unknown hopefuls, the former top player in the world had to struggle up from square one.  Agassi took it all in stride, however, and did not allow himself to think he deserved an easier path because he had won the top prizes in his sport.  He was no longer a superstar, but the humbling experience taught him to appreciate what he’d achieved — and what he’d lost — and it stoked his competitive fire.  He focused on improving himself one day at a time, and before long he was back, better than ever.