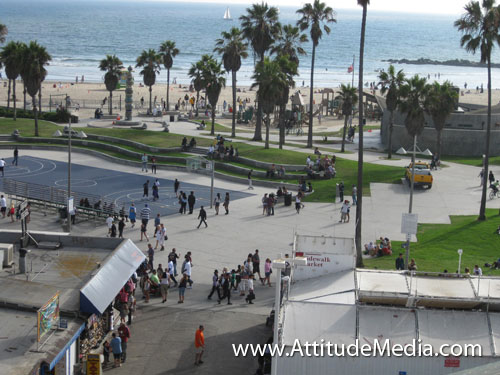 Venice Beach and I have been interviewing each other about my possible relocation here; towards that end I have rented an apartment here for the last week, and will be here a little longer. Some random observations:

The particular neighborhood where I am - within steps of painfully hip Abbot Kinney Avenue - must have one of the highest skinny people to fat people ratios in the US. I begin to suspect that someone is posting sentries to keep normal Americans - obese slobs - out of this neighborhood. I'm allowed to walk around under the "local old guys" exemption to the coolness laws. But at least now I know where all the stylish people have been hiding.

Marijuana is sold openly under California's medical marijuana laws; what is interesting (as a cigar smoker) is that while cigar smokers pay a punitive tax of about 50% of the wholesale value of each cigar, pot smokers pay no tax, as the state does not tax "medical" products.

I'm directly across the street from Robert Downey Jr.'s weird huge, grey mansion/loft. Which is directly next to a broken down old shack which some local artists are using as workspace, before a new restaurant kicks them out. On the other side of that is the Mystic bookstore. The neighborhood has an interesting mix of art galleries (almost all local artists), coffee shops, high end but tiny boutiques, and restaurants, but no chain stores, which I find refreshing.

Most interesting visual: surfer in wetsuit, with surfboard in one arm, on a skateboard. If it's been a while since you've ridden a skateboard while carrying a large surfboard, you might not recall that it's a very impressive balancing act.

While California is known for its car culture, what I really notice are people walking and biking. In places like this (or Colorado, or, for that matter, Amsterdam) biking as an everyday form of personal transport on retro style bikes is making a real comeback. Of course, it only works in places with good year-round weather, and over relatively short distances, but biking does seem to be gaining traction.

While I am no doubt one of the handful of people around here to ever vote Republican, the area is not terribly political. Hard to focus the rage when you're distracted by the search for the perfect $5 cup of coffee or the very finest in Japanese denim, cut locally.

I won't be here much longer as I have a lot of work to do, and I'll need to head back to distraction-free Phoenix, of which I'm reminded of by a local sign on a building nearby: Hell is Waiting, but It's a Dry Heat. AM