Why not go - Tourist Mobs on Ocean Drive 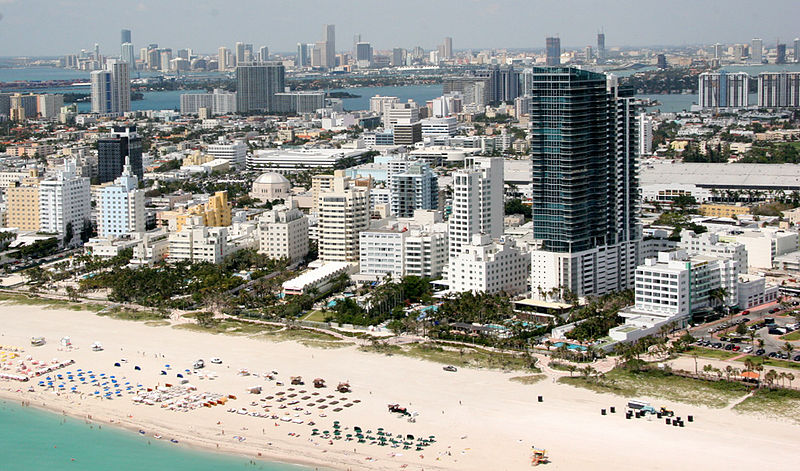 The summers are hot and brutally humid, but still crowded. When I first went to South Beach many years ago some of the old art deco hotels had been renovated, and the area was a new center for fashion photography, hosting a lot of photo shoots at the hotels on Ocean Drive. Now virtually every building along Ocean Drive has been renovated as a hotel, with a restaurant in front. The area is now a tourist ghetto, with hucksters for each restaurant trying to ensnare passerby, and so many restaurants and hotels that they all blend into one long pit of middle class tourism, like the economy seats on a huge airplane.

Lincoln Road is still worth a stroll; see our article on the coolest streets. One of my favorites hotels in the world, the Ritz Carlton at South Beach, is the place to stay; a real refuge. Huge, beautifully designed lobby, perhaps a touch too close to a disco in design and lighting, but very soothing and sophisticated nonetheless. Great service, and very nice rooms. Do your best to get a room with a balcony and you’ll be rewarded with one of the best views in Miami, overlooking the wide vista of the beach, as well as the ocean. When I was last there a huge James Bondish type yacht was just offshore, so large that it housed at least 4 of it’s own jet skis in addition to other ancillary craft; you’ll also see commercial boats further offshore, as well as ocean liners heading out to sea, boats pulling parasails, small planes pulling beachfront ad banners, and more.

In South Beach, you’ll see far fewer fat people than you normally would in America. Obese people may not be so anxious to be on the beach in a swimsuit, but perhaps more importantly, Miami seems to attract more foreigners than Americans, and foreigners have not yet fallen victim to the American obesity epidemic. Miami is, at least legally, part of America, but I heard very little English in the Ritz Carlton; a lot of tourists from South America, as well as Europe. While you may think of Miami as being a bastion for sexy fun, the fact is that in the summer it is mobbed with families. Even the Ritz Carlton, which back in the day was oriented towards business travelers, attracts hordes of vacationers sharing rooms with their loud, unruly spawn. Winter is the time to go in terms of weather as the humidity falls off, but with, of course, much higher hotel prices.

You may be tempted to escape the Miami crowds and explore Wynwood, the supposedly up and coming arts district. Big mistake. Just as in the case of downtown LA, but much more so, commentators (are you listening, Forbes magazine?) are way too quick to identify an area as gentrifying when it has just started the process, which can take many years. There may be people making art in Wynwood, but you won’t see much of it – all you’ll really encounter is a still very gritty neighborhood a long way from being fun to visit.