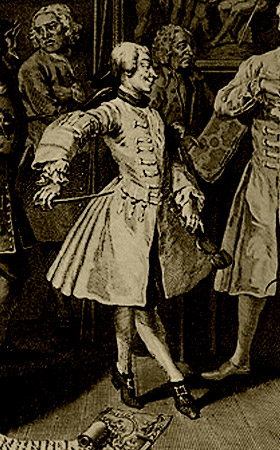 Q. I’m a guy, and it’s time for some serious wardrobe replenishment. What are some must-haves I should shop for? I need party/dining/date clothes.

A. You’ll get away with a blazer and jeans in almost any setting…Alternately, ditch the blazer in favor of a track jacket, hoodie, or… cardigan swe1ater… pants-wise, save your slacks for work. Dark-rinse jeans are more casual but still versatile…finally, sneakers will work just about everywhere. (Suzzanne D’Amato, Washington Post, October 29, 2006) 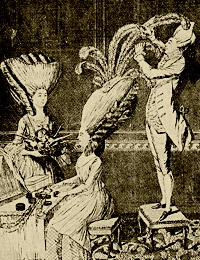 It is more important to be a gentleman than to look like one. And, Oscar Wilde and hordes of dandies aside, a real man does not spend an excessive amount of time, thought, or money on his appearance. Nonetheless, pride is at the heart of manliness, and gentleman takes a reasonable degree of pride in their appearance. (It's critical to realize the difference between pride and vanity – see our recommended reading list, especially “Pride and Prejudice” and “The Fountainhead.”)

The fundamental requirement of appearance is to be clean and neat. Clothing should be functional and stylish, although aiming for cutting edge style is an invitation to looking foolish. As in all things, be yourself, but your best self. You can’t look good in clothes that don’t fit properly. Dress your age; a 50 year old man looks foolish dressed like a 20 year old, and vice versa, although in America the overwhelming tendency seems to be for middle aged men to dress like adolescents. 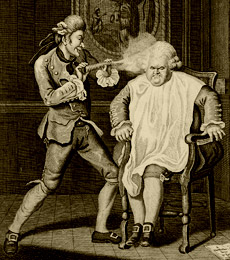 Although America is a youth oriented society, this doesn’t mean that you need to keep dressing like a kid; in particular, get rid of that tired baseball cap, and under NO circumstances, wear it backwards. This is a custom that began with black rappers. When imitating such styles, it’s important to ask yourself a few questions: Are you black? Do you make your living glorifying violence and misogyny? Do you often try to maim or kill your business competitors? If the answer to these questions is no, then you have no call to dress like a rap star. Eminem actually has some cool songs, but he needs to pull his pants up.

The best time to be wearing a baseball cap is if you’re playing baseball. It is also acceptable while mowing the lawn or working out. Under no circumstance is it acceptable to wear any sort of hat while eating, and generally speaking, hats should be removed while indoors.

The key principle to keep in mind here is that a gentleman never tries to appear to be something he is not. If you’re 50, glory in your hard won experience, leaving the superficial things of youth for the young. The more important things of youth - physical fitness, ambition, lust – these you can try to retain. But you’re not in college anymore, and there is nothing good about looking like you are. Dress like a fit stylish 50 year old man, not like a kid.

Men of all ages look good in a well tailored suit, with a nice shirt and tie. A gentleman may dress casually, as appropriate to the occasion, but never looks like a slob, even in his own home. Contrary to Hollywood example, it's okay to make an effort to look presentable; nice slacks rather than jeans, a tie when appropriate, a sports jacket is often nice. The current Hollywood ethos is that the higher you are on the food chain, the less of an effort you need to “dress up”. The current thinking is only that “servants” of one type or another need to wear a suit and tie, while those at the top are free to express their superiority by looking as sloppy as possible. In this regard, its instructive to compare the look of modern movies stars off-the-job with current stars at leisure; the latter could easily be mistaken for homeless or destitute. Or, for an even more jarring comparison, find a picture of those poor souls waiting in food lines during the depression. As sad as they may be, the men are all wearing hats, and most of them coats and ties. The sad truth is that an unemployed man from the 1930s is typically better dressed than a millionaire from the early 21st century.

You don’t need to model your look after anyone; not a movie star, certainly not an athlete, not the pictures from a magazine. Appreciate the craft of nicely made articles of clothing, wear them in a way that makes you feel confident and, as always, aim to be your best self, rather than someone else.

We men have dragged our juvenile getups into maturity, our sneakers and T-shirts and jeans and baseball caps. There was a time when the costume worn by a child and an adult were pretty much distinct. That time is over.

"I'm 47 years old," designer Domenico Dolce of Dolce and Gabbana says, "I want to dress like a man, not a boy."

A man's style is best judged by what he wears when no one's looking. Even if you're just reading the paper alone on a Saturday morning, it makes a difference.