Tom Monaghan, founder of Domino’s Pizza
Born in 1937, Monaghan was 4 years old when his father died on Christmas Eve, leaving his mother a single parent with a income of $27.50 a week and two young boys to raise. She took the boys to a Catholic orphange, where Tom was often beaten by the nuns. After spending time in a seminary, then the U.S marines, Monaghan and his brother borrowed $900 to buy a small pizza store in Ypsilanti, Mich. Tom Monaghan traded his share in the pizza shop for a used Volkswagen, and Tom renamed the shop Domino’s Pizza. In the midst of rapid and chaotic early expansion, Monaghan lost control of the business to his bank, but the company was in such bad shape that the bank gave control back to Monaghan.

“I still had the debt to pay off, though. It took me about two years of going day to day, thinking each day would be the end. I had well over 1000 creditors, and I got lawsuits from about 150 of them. I was on the phone every day, telling them all the same thing: “All I can do is pay for my food and pay my rent so I can stay open so I can get caught up and pay you.” From 29 employees, we were down to three in the home office, two of whom were me and my wife.”

Unable to afford a lawyer, Monaghan defended the lawsuits himself I was living in a house with no furniture and driving old delivery cars. I got to know the judge really well, and he saved my shirt, usually working out terms where I paid creditors a few dollars a week over a long, long period. I had some checks printed up with the name Operation Surprise. Most of the creditors had written off the debt. I wrote letters thanking them for being patient and said, “Here is the first check .”

He paid everyone back, and continued the expansion of Dominos, which he sold in 1998 for over $1 billion. He later sold almost all his possessions and devoted his life to religion and charity.

In our times, when individuals, corporations, and governments all seem to regard repayment of debt as optional, no topic could be more important than how a gentleman handles his debts.

A gentleman pays his debts. Period. He does not contract for things he does not believe he will be able to pay for, and, if he is for some reason not able to pay a debt when it comes due, he pays for it as soon as possible. A gentleman, even a speculative entrepreneur, does everything in his power to avoid bankruptcy, which is simply a legal device that enables a man to legally do a dishonorable thing. The classiest men repay a debt even if it has been legally discharged.

The essence of a man paying his debts is a simple refrain to the core value of manly conduct – that a man keeps his promises, and is good as his word. This applies to vows of fidelity in marriage, showing up on time for appointments, and paying what a man says he will pay. One of the greatest displays of gentlemanly conduct is when a man has been released from legal obligations to pay his notes, or when a creditor no longer expects repayment due to the severity of the circumstances, but the gentleman still pays the debt. There are all sorts of quiet forms of heroism, and this is one of them. 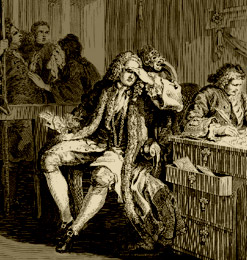 Sometimes a gentleman is forced to ask to borrow money. In such circumstances, a gentleman looks first to those businesses and institutions, such as banks and credit card companies, that are in the business of lending money. If he cannot raise adequate funds from such sources, he may be forced to look to friends or family. In such difficult situations, he puts the matter frankly, and without burdening the listener with a tale of woe. A gentleman may be dealt a grossly unfair hand, but he does not complain about it. He puts the manner, as much as possible, upon a business footing, as follows:

“Unfortunately, I’m in a situation where I need to borrow some money. If you could loan me $1,000 I’d be extremely grateful. I believe I will be able to repay you in 3 months, and I would be more than happy to pay a reasonable rate of interest. If this is inconvenient for you, of course I understand.”

A debt is a debt, whether that be to family, friends, banks, or credit card companies. The size of the lending institution does not matter so much; it’s not alright to stiff a corporation just because “they’ll never miss the money”, or “they don’t really need it”, or “this is just a rounding error for them.” The issue is not nearly so much their need for repayment as your need to know that you are a man that pays his debts, if at all possible.

There are some times when repayment of debt is simply not possible. A man does not commit seppuku at this point; but he also does not evade the ugly reality of his situation. He informs his creditors, without making excuses. Yes, its true, the philistine masses refused to buy his brilliant new product, he had to use his last few dollars to pay for his mother’s surgery, he was defrauded by charlatans, and the tax man repossessed all his furniture, as well as his fiance’s diamond. He tried to shoot himself in the head, but had already pawned his revolver. Nonetheless, the note reads like this:

“I’m very sorry to say that I won’t be able to repay that $1,000 debt, or any of the accrued interest, as I had promised. I will make my best efforts to repay the debt as soon as possible in the future.”

A gentleman does not make excuses; he makes amends.