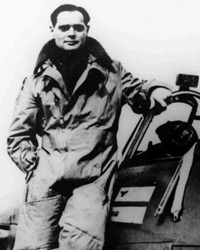 Don't listen to anyone who tells you that you can't do this or that. That's nonsense. Make up your mind, you'll never use crutches or a stick, then have a go at everything. Go to school, join in all the games you can. Go anywhere you want to. But never, never let them persuade you that things are too difficult or impossible. - Sir Douglas Bader was a British fighter pilot who lost both legs in a flying accident, but still fought in World War Two. He was knighted for his work with the disabled, and the quote above is from his talk to a 14-year-old boy who had lost a leg in a car accident.